Zhi-Ming Su – Reaching Out to Touch

Animation and Aboriginal Children in Taiwan

Taiwan aboriginal means the residents who have been living in Taiwan before the immigration from Mainland China in the seventeenth century. The Council of Indigenous People, Executive Yuan in 2006 recognized thirteen aboriginal tribes in Taiwan. They are Tayal, Saysiat, Bunun, Tsou, Rukai, Paiwan, Puyuma, Amis, Yami, Thao, Kavalan, Taroko and Sakizaya. Their combined population is four hundred and seventy-four thousand people. This constitutes two percent of the population of Taiwan, distributed throughout the central mountains and the east coast (Taiwan Aboriginal Tribes 2007).

The living styles of these tribes are grounded by their environments. They make a living from whatever resources are available. Those living on a mountain live off the mountain by hunting and farming while those living near the water live off the water by farming and fishing.

All the aboriginal tribes in Taiwan pay attention to ancestral belief. They believe that their ancestors’ spirits are living high in the mountains. Each tribe has unique memorial ceremonies. Some of their cultures have fused due to intermarriage or familiarity by shared locations. They dance and sing for their ancestors to favour them with good health and a substantial harvest the following year. They perform very well in music, culture, and sports endeavours.

However, the educational system in Taiwan disadvantages indigenous children. They have education at primary schools and high school generally, but fewer students continue their learning in higher education. They receive less educational opportunities and resources than children in the rest of the country, for they are living in the mountains and remote eastern regions. According to the survey by the Ministry of Education, most of the primary and high school teachers prefer to teach in the city schools, with some teachers working in the aboriginal tribes for few years as a passport to another school for teaching. Although all the aboriginal primary schools are small scale, the allocated educational resources are below the national average. Often the management strategies and the teaching methods are not beneficial in furthering traditional tribal values and culture with children. Thus the majority of aboriginal children learn traditional values and culture from their tribe and family (Aboriginal Education 2007).

Children’s Animation Workshops in the World

The pioneer of children’s animation workshop in the world is Association International du Film d’Animation (ASIFA). It was established in 1960 in Annecy, France and today the association has more than thirty chapters, totaling over 3000 members around the world.

The roots of ASIFA Workshop Group go back to 1979. The animation workshop is held annually over ten days leading to the Annecy Festival. There are over 30 ASIFA children workshops in the world, where children are supported in making animated films. Every year a worldwide animation project composed of several territorial children animation workshops is staged. Instructors are animators from different countries, and some of the productions are collaborations between several nations, with exchanges of children. New generations are thus introduced to animation from the inside, whether they advance to become animators themselves, or become an appreciative audience.

ASIFA has amassed throughout the years over 400 titles in 35mm and 16mm, and is transferring them to video for better access to its members. Exchange of both works and directors is organized between various countries for the benefit of the art of animation.

The children’s animation workshop in Taiwan is modelled on the ASIFA workshops and has been taught throughout Taiwan since 2000 as a result of the affordable and portable animation technology. The computer, sound and image software and digital camera has popularized animation production in Taiwan. While teachers can instruct pupils in simple animation skills, such as cut-outs and clay animation, to make a film by personal equipment fifteen years ago was quite difficult. The high expenses for animation production tended to exclude smaller companies. Technological developments now make it possible for anyone to make and edit their animation using sophisticated home equipment.

The workshops have utilised Mini DV cameras, Digital cameras, tripods, a computer with editing software, a projector and lunch box. Lunch box is very useful for children to test the timing of their animation and to adjust the rhythm by themselves. We taught students how to make animation but the post-production involved complicated editing software so instructors completed all the sound and image editing.

The children’s animation workshops were started in 1999 by students studying at the Animation Institute in the Tainan National University of Arts (TNNUA). Many excellent Taiwanese young generation animators graduated from there. When Yu-Ling Liu was studying animation at TNNUA, she organized and managed Taiwan’s first children’s animation workshop. This was staged at the Shinzhu Image Museum. Subsequently other animation students from TNNUA joined the teaching group.

The first animation workshop for Taiwan’s aboriginal children followed in 2003. It was initiated by Shu-Man Chang. Chang visited aboriginal tribes through friends who were working at Taitong Historical Museum. Chang had travelled the east coast of Taiwan many times, and was fascinated and impressed by the unique aboriginal culture and thought there was an opportunity to provide more educational activities for these children as well. What eventuated was the animation workshop program for indigenous Taiwanese children. The focus became the preservation of traditional aboriginal culture through animation.

Workshop grants were established by the local governments and the Ministry of Education. The elementary schools apply for grants for the activities during summer and winter vacation each year. It includes transportation and provisions, fare for instructors, and animation materials. The local elementary schools or residents provide accommodation for instructors. The volunteer instructors from TNNUA take the responsibility to design and implement the whole program with the Animation Institute providing animation production facilities.

Each workshop runs for either three or six days and is held every winter and summer during school holidays. There are three to five children in a team with each team making a ten to fifteen second animation. We get the children to focus on a specific topic such as ‘Magic,’ ‘Sea world,’ or ‘Summer time’ to enable them to tell a story. Children proved brilliant storytellers and highly imaginative. Otherwise, the program is sequentially structured progressing from animation principles to making objects move for fun, to understanding select animation techniques, to story telling by brainstorming, to character development, scene production, timing and finally film shooting.

A three-day workshop is very limited so we needed to time-manage well and complete the tasks efficiently. During the workshop students make cut-outs, drawing, shape clay and produce pixilation animation. These techniques provide a quick, easy and fun way to learn and to achieve a remarkable work by cooperation.

An observation of these workshops is that among the skills employed, children can make superior cut-outs. There are two general techniques that fall under the heading of cut-out animation, the major difference being lighting. Like most animated images, cut-outs generally are top lit, allowing the viewers to see their colours, textures, and so forth. However, a few artists have specialised in silhouette animation, which is back lit, causing cut-outs figures to have a solid black form. Both types of cut-out animation may involve hinged figures to facilitate movement, or non-hinged figures. If no hinges are used, figures can be moved through a ‘‘substitution method,’ meaning that an entire figure is cut-outs and used for each of the necessary incremental movements (Furniss 1998, p. 45).

Children were keen to colour their cut outs so we used top-lit lights to present the vibrant colours forcefully. We mixed different techniques occasionally, such as cut-outs with clay or cut-outs with the object to form a multi-media animation.

To sustain children’s attention on all operations, we try to make the workshop vivid and vigorous. In-between different stages singing and other traditional practices and rituals, amusement generally is organised. As the creation of animation combines art, music, drama, performance, story telling, and entertainment it is therefore an excellent medium with which to approach expressing and preserving traditional culture especially through pixillation. Pixilation consists of applying the principles normally used in the photographing of animated and cartoon movies to the shooting of actors, instead of placing drawings, cartoons of puppets in front of the animation camera, we place real human beings, composing a single frame at a time (Russet & Starr 1976, p. 125). Norman Mclaren’s Neighbours (1952) and Two Bagatelles (1952) exemplify the pixilation technique. Transferring traditional cultural practices like dance and ritual into animation frame by frame is an easy step for children to make.

Over the five years that the animation workshops in the remote districts in Taiwan have been staged the children evidenced a propensity for art. Not only have they learnt animation skills from working in teams but also they acquired an expressive outlet for their traditional cultures enabling a wider appreciation of their culture beyond their tribal context. This occurred without requiring students to reference their traditional cultures. Many incorporated traditional decorative patterns in their costumes, specific animals and plants from their daily lives, as well as the characters of the tales or legends from their ancestors. Thus preservation of traditional aboriginal culture was effected. Self-confidence was encouraged through (fun) team-work, like chorus singing. We even used their singing as the sound track for the animation produced in 2004.

Art education is a significant issue in contemporary first school enlightenment in Taiwan. Animation has enjoyed increased usage in educational instruction in recent years, favoured because it enriches the content of art learning through combining image and sound. It has been over one century since the first animated film made by Emile Reynaud screened in 1892 (Bendazzi 1994, p. xx). ASIFA has pioneered and encouraged indigenous children to make animated films from their viewpoint in order to present their inner world. They are not just audiences anymore. New technology makes it possible to assist all children to develop their animation aptitude.

We can assist aboriginal children to tell their own stories through conducting animation workshops. The workshops have become an exciting twice yearly event in Taiwan for both the children and their teachers who learn from each other’s experiences.

Finally, this is an opportunity for children to show their films at Animation Festivals around the world. One of the workshop instructors Chang is the membership of ASIFA. She submitted aboriginal children’s animation to ASIFA. The film made by the children was selected for screening in the ‘Children’s animation collection’ at the Hiroshima International Animation Festival, Japan in 2006. Their outstanding works have received great admiration. Both the children and instructors were pleased at the outcome. The workshop brings some educational benefits to the children while highlighting to Taiwanese society ways to effectively educate aboriginal children and something of their cultural history. 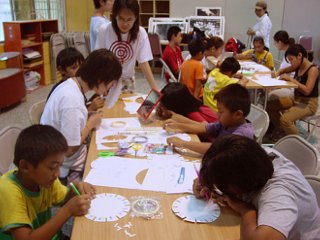 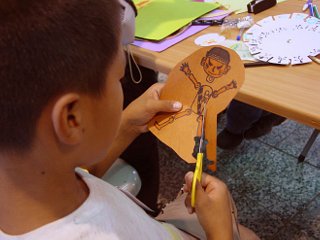 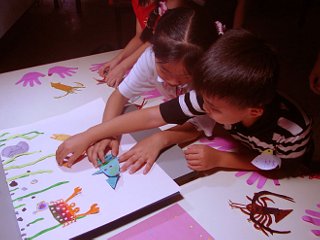